The U.S. Senate is currently negotiating a reauthorization of the Higher Education Act (HEA). HEA governs federal policy on higher education. Major provisions of HEA include grant and loan programs such as Pell and TEACH Grants; grants to institutions for educator preparation programs; access and affordability of higher education, such as the TRIO and GEAR UP programs, and more. These programs influence the educator pipeline and directly impact schools and classrooms. HEA was last reauthorized in 2008 and is the top education priority for Congress this year.

Boost funding for special and gifted/talented education to make sure all students can thrive.

On Monday, the Trump Administration released its proposal for Fiscal Year (FY) 2021 spending. Overall, the budget proposal cuts the Department of Education (ED) by $6.4 billion, or 8.4 percent. The budget also includes $5 billion for proposed Education Freedom Scholarships, or tax credits for vouchers that could be used toward private school tuition.

Special education funding was largely untouched in the ED budget. Aside from a $100 million increase (equal to less than one percent) to the Individuals with Disabilities Education Act (IDEA), all programs authorized under the IDEA were level funded. With diminishing spending power from year to year, level funding equates to a cut roughly equal in size to the inflation rate.

In the last three years, attempts by the Administration to make significant cuts to ED and to divert public funds to a private school voucher program have been unsuccessful. Rather, Congress, which has the ‘power of the purse,’ has sustained and/or incrementally grown critical programs at the Department. Much of the credit for Congress’s actions goes to grassroots advocacy. Voices like yours have made an important difference as appropriators make decisions about annual spending. Please join CEC in supporting public education through this letter-writing campaign.

For more information on how to take action and to sign up for CEC’s legislative alerts, visit CEC’s Legislative Action Center (LAC) website.

On Tuesday, the U.S. Department of Education issued the 41st Annual Report to Congress on the Implementation of the Individuals with Disabilities Education Act (IDEA).
Since its enactment, IDEA has required an annual report to inform Congress and the public about implementation of the law in four main domains:
Key findings [from 2017 state-reported data] include:
To view the full report, go here.

The Office of Superintendent of Public Instruction (OSPI) plans to submit an amendment to Washington’s Every Student Succeeds Act (ESSA) Consolidated Plan on February 3, 2020. Prior to submitting, they are seeking public comment on the proposed amendment.

The public comment period opens January 7 and will close at 5 pm on January 15. You may review the proposed amendment and submit your comments through their public comment survey.

The survey is available in:

It may be helpful to open a copy of the ESSA Consolidated Plan to refer to while you provide feedback, specifically pages 33–35.

If you have questions, please contact Dr. Deb Came, Assistant Superintendent of Assessment and Student Information, at deb.came@k12.wa.us.

As lawmakers begin to put pen to paper, it is important to keep education funding top of mind through advocacy from education funding stakeholders. To that end, CEC has developed a Call to Action through the Legislative Action Center for members to engage in a final push on FY 2020 spending. The template letter calls for spending increases to the following programs:

It is critical that CEC and other education funding stakeholders keep the drum beat going. To join in this call to action, please follow this link.

For more information on how you can advocate for students needing special education and other services, visit CEC’s Legislative Action Center and sign up for their Action Alert emails.  Together, we can make a difference!

Social emotional learning (SEL) is broadly understood to be a process through which people build awareness and skills in managing emotions, setting goals, establishing relationships, and making responsible decisions. Research highlighted in this report demonstrates that the effective integration of SEL in school systems creates a foundation for students’ increased school and life success. The Social Emotional Learning Indicators (SELI) Workgroup was established in 2017 to build upon the work of the previous Social Emotional Learning Benchmarks (SELB) Workgroup. Committed to focusing on the whole child, the SELI Workgroup applied guiding principles to ensure that statewide SEL work promotes equity and is culturally responsive, trauma-informed, and universally designed for access by all learners. Recommended actions for the SEL Advisory Committee (to be formed by OSPI as required in Senate Bill 5082 [2019]), each of which is dependent on meaningful engagement of diverse stakeholders, include the following:

The contents of the report along with appendices can be found here. 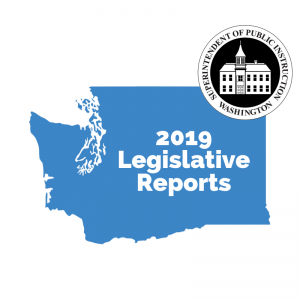 The annual OSPI application for federal IDEA funds has been posted on OSPI’s Special Education Web page and will be available for public review and comment for a period of 60 days, prior to final submission to the USDOE Office of Special Education Programs by May 17, 2019. Because OSPI is awaiting a decision by the Legislature regarding the use of IDEA funds in Safety Net awards, two budgets are posted—one budget including federal funding in Safety Net as a state level activity one budget excluding the use of federal funds for Safety Net. Should the Legislature reach a decision prior to our filing date, the budget will be updated.

The U.S. Department of Education released four guidance letters addressing students with disabilities in correctional facilities, discipline procedures, children with disabilities place in private schools by their parents, and response to intervention.  MORE

With his latest budget proposal, the president is calling for significant changes to Medicaid that advocates say would have big consequences for people with disabilities. READ MORE

If you haven’t had the opportunity yet, this is the year to join your colleagues from Washington state to storm the Hill and advocate for our students receiving special education and other services.  The Special Education Legislative Summit (SELS) is an amazing experience to learn about the key issues affecting special education today and share information with Washington legislators who have the ability to make a positive impact on the lives of our students.

Registration for SELS is now open .  The goal of CEC and CASE is to have all 50 states in attendance, so this year is a great time make Washington state’s voice heard loud and clear in the other Washington.

For more information about SELS, visit https://specialeducationlegislativesummit.org/.  Register now and reserve your place at SELS!

The budget process is gearing up for FY 2020.  The official kick off will come on March 11 as President Trump submits an outline of his budget proposal to Capitol Hill.  Details with recommendations for funding levels for specific education programs will come later in the month.

The Trump Administration offered a foreshadowing indicating that the budget may include a cut as great as 14% for “non-defense discretionary” (NDD) spending, which includes education.  If the current budget agreement is not amended by the Congress, NDD spending would be cut by 9%, or $55 billion.

In the Senate, Budget Committee chair Sen. Mike Enzi (R-WY) noted that an increase in spending caps for FY 2020 is necessary to move forward, implying likely adoption of increased budget caps for both defense and NDD spending.

The House Budget Committee held a hearing on the FY 2020 budget where Sarah Abernathy, representing the Committee for Education Funding, offered testimony about the critical need for additional education funding.  Her thoughtful remarks can be found here: https://cef.org/advocacy/cef_congressional_hearings/

Infrastructure Bill
The newly organized Democratic-controlled House Committee on Education and Labor hit the ground running this week.  The Committee held a markup on a new bill, introduced by Chairman Bobby Scott (D-VA), the Rebuild America’s School Act, H.R. 865. The bill authorizes more than $70 billion in grants and $30 billion in bonds to address physical and digital infrastructure needs in schools.  The bill passed by a partisan vote of 26-20.

The issue of guns in schools came up when Rep. Rick Allen (R-GA) offered an amendment to prohibit the federal government from denying funds to schools that arm teachers.  Rep. Jahana Hayes (D-CT), former National Teacher of the Year and new member of Congress, responded vehemently that teachers do not want to be armed. The amendment was rejected. This topic promises to continue on the agenda in different forms, particularly considering the House just passed a new background check bill which was opposed by Republicans.  Rep. Hayes also spoke passionately about the need for a greater federal investment in education.

Restraint and Seclusion Hearing
On Wednesday, the House Subcommittee on Early Childhood, Elementary and Secondary Education held a hearing titled “Classrooms in Crisis: Examining the Inappropriate Use of Seclusion and Restraint Practices.”  Democrats plan to introduce legislation shortly that would ban public schools from placing students in isolation or seclusion and limit the use of physical restraints.  This legislation was introduced in the last Congress as well.

The Government Accountability Office  (GAO) offered data from the 2013-14 Civil Rights Data Collection indicating that nationwide 61,000 were physically restrained that year. Of those 75% were students with disabilities. Prof. George Sugai of the University of Connecticut noted the consequences can be significant interfering with the development of positive relationships and student’s ability to function in more normalized environments.  Allison Sutton, a teacher from Kansas, noted that after receiving crisis training and training in de-escalation technicques noted that her use of restraint and seclusion declined dramatically.  Rep. Donna Shalala (D-FL) reviewed the story of Andrew McClain, an 11 year old boy who died from suffocation after taken to a time-out room in a psychiatric hospital in Connecticut.  “It’s barbaric to confine students alone in locked rooms or to use abusive methods to restrain little children,” she said.

Legislation addressing the use of restraint and seclusion is a priority of Chairman Bobby Scott (D-VA), so we can expect action on this bill soon.

Hearing on restraint and seclusion: https://edlabor.house.gov/hearings/classrooms-in-crisis-examining-the-inappropriate-use-of-seclusion-and-restraint-practices

The House Committee on Education and Labor has announced the intention to hold the following five hearings on the reauthorization of the Higher Education Act in the next few months.  Chairman Scott (D-VA) and ranking member Virginia Foxx (R-NC) issued a joint announcement indicating that the hearings will be bipartisan.  This is in great contrast to last year when then-chair Rep. Foxx developed and secured Committee passage of a Higher Education Act reauthorization bill (The PROSPSER Act) which was the product of a partisan process and was opposed by all Democrats on the Committee.

The hearing topics are:

Sec. of Education Betsy DeVos announced a new proposal this week which would expand school choice by creating new tax credits for individuals and businesses which donate to scholarships for students to attend private school.  The $5 billion bill was embraced by Sen. Ted Cruz (R-TX) and Rep. Bradley Byrne (R-AL) who will introduce the Education Freedom Scholarships bill which would create the program.  Chairman Lamar Alexander (R-TN) has endorsed the legislation.

Conservative organizations, which are generally great fans of vouchers, came out swinging.  The Heritage Foundation noted that this proposal would open the door for federal regulations on private schools.  They said the federal tax code is an inappropriate place to intervene in state policy.

Neal McCluskey of the Cato Center said in a tweet:

“Where is this authorized in the Constitution? What will stop the feds from telling states what to do? Choice is great, but so is federalism.”

The Trump Administration has repeatedly proposed programs to expand the use of vouchers, none of which have been endorsed by Capitol Hill.

The Board meets on the first Friday of every month during the school year.